Thank you Vodacom for your Gift of Vision!

19 January 2017
The Health Foundation is proud to have facilitated a donation from Vodacom for the Gift of Vision programme. In a beautiful example of private-public teamwork, 365 children at underprivileged schools in the Paarl East area received spectacles to improve their vision.

Through the Western Cape Government’s School Health programme, school health nurses do basic vision screening, among other health checks. Children with vision problems are then referred to a private optometrist contracted to the Department. However, the state budget is not sufficient to meet all the needs. That’s why The Health Foundation seeks donations to give children a Gift of Vision.

The Vodacom Foundation, motivated by Mr Alberts Breed of the Western Cape Vodacom region, recognises how important vision is for children’s education and development. Vodacom made a donation of R80 000, while The Health Foundation added R30 000 for the optometrist’s fees. With these funds, top quality spectacles – individually prescribed and fitted by Stellenbosch Optometrists – were given to 365 learners at four schools in the Paarl area, namely; New Orleans Primary, New Orleans Secondary, Nederburg Primary and Orleansvale Primary.

The successes of this programme were recently celebrated at a hand-over ceremony at New Orleans Primary School where 112 children were presented with their spectacles. Vodacom and The Health Foundation wanted to ensure that this event would leave behind a meaningful contribution to the school, so we did a make-over to the Life Orientation and Dance classroom where the event was held. The classroom was re-painted and the learners had fun adding their hands to a beautiful mural that that will remain in the room. The event was attended by numerous special guests, including the Western Cape Ministers of Health and Education and the Mayor of Drakenstein, Mr Conrad Poole.

Speaking at the event, the MEC for Education, Ms Debbie Schafer stated that “A healthy learner is more likely to succeed than a learner who experiences challenges with their health. It would be a tragedy if the reason children cannot read is not because they do not have the ability but because they cannot see properly”. Her colleague, the MEC for Health, Dr Nomafrench Mbombo encouraged other corporates to take part in the overall School Health programme, stating that Gift of Vision is a flagship programme that shows the successes of transversal partnerships.

The Health Foundation is committed to contributing to a healthy start to life. That’s why we support the School Health programme. If you or your company want to make a difference in health, education and the future prosperity of our country, get in touch with us to make your gift a reality.

Dignitaries from the Local and Provincial Governments, Vodacom, and The Health Foundation stand with some of the learners who benefitted from the Programme 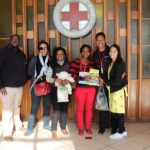 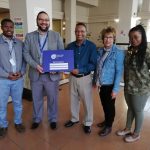 The Health Foundation donates towards improving maternal and neonatal healthUncategorised